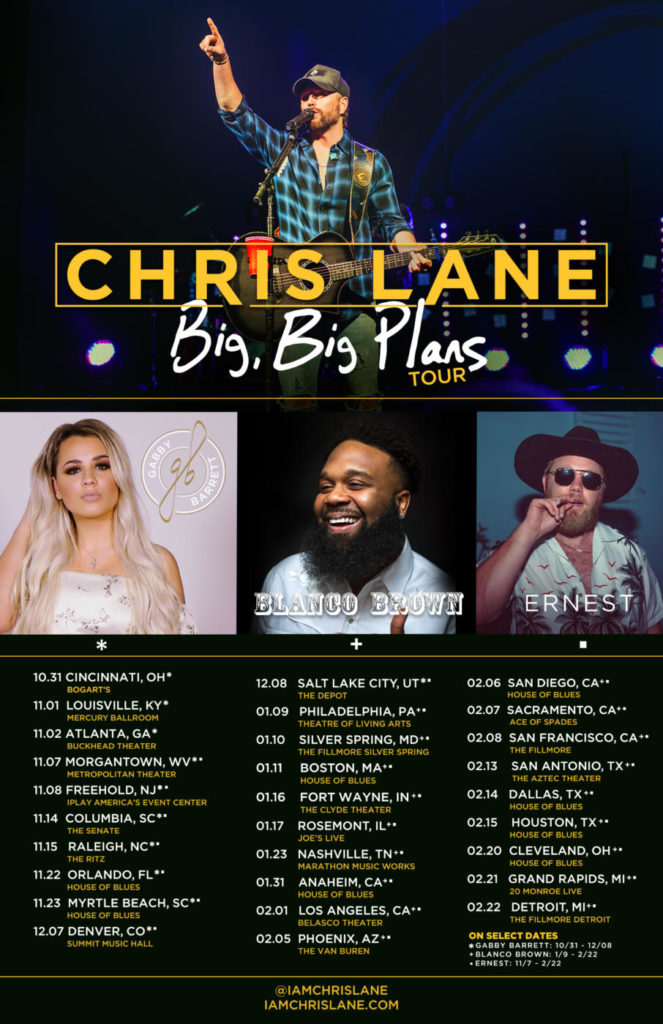 COAST-TO-COAST RUN KICKS OFF THIS FALL WITH GABBY BARRETT, BLANCO BROWN AND ERNEST

NASHVILLE, TENN. (September 3, 2019) – PLATINUM-certified hitmaker CHRIS LANE follows his rocket-fueled summer with the launch of a huge headlining tour, announcing his BIG, BIG PLANS TOUR today (9/3), presented by Ones To Watch and produced by Live Nation.

A case in point, his red-hot current single “I Don’t Know About You” has just cracked Country radio’s TOP 10, a can’t-get-enough romantic jam which is already certified GOLD with more than 222 MILLION streams to its credit. It’s Lane’s fourth-straight GOLD or PLATINUM single, and another driving force behind his career total of over 1.1 BILLION streams.

“After a top-notch summer touring with Brad Paisley, I couldn’t be more excited for my Big, Big Plans tour to kick off! Having artists like Gabby, Blanco, and Ernest out with me will make it a fun show from start to finish,” says Lane. “I’ll be bringing the energy and may even have some surprises in store. We’ve amped up the production to a new level and I can’t wait for people to see it!”

Tickets for Lane’s BIG, BIG PLANS TOUR will go on sale to the general public this Friday (9/6) at 10 a.m. local time. Here’s a complete list of dates and cities on the next-level run:

^ with Gabby Barrett
* with ERNEST
+ with Blanco Brown

Lane’s BIG, BIG PLANS TOUR comes on the heels of a personal milestone which turned public in a massive way – the fan-demanded release of his track “Big, Big Plans,” penned for his now-fiancée, Lauren Bushnell. Written by Lane alongside Jacob Durrett and Ernest K. Smith, the heartwarming song was first heard during Lane’s unforgettable proposal video – a clip which has now clocked in more than 5 MILLION views.

Last weekend, Lane wrapped the U.S. dates of his run as direct support on Brad Paisley’s WORLD TOUR and has select headline shows lined up for September before rejoining Paisley for the European portion of his high-profile trek in October. Lane’s VEVO acoustic video for “New Phone, Who’s This” – a standout cut from his acclaimed LAPS AROUND THE SUN album – is out now.

To learn more about Chris Lane, go to iamChrisLane.com.