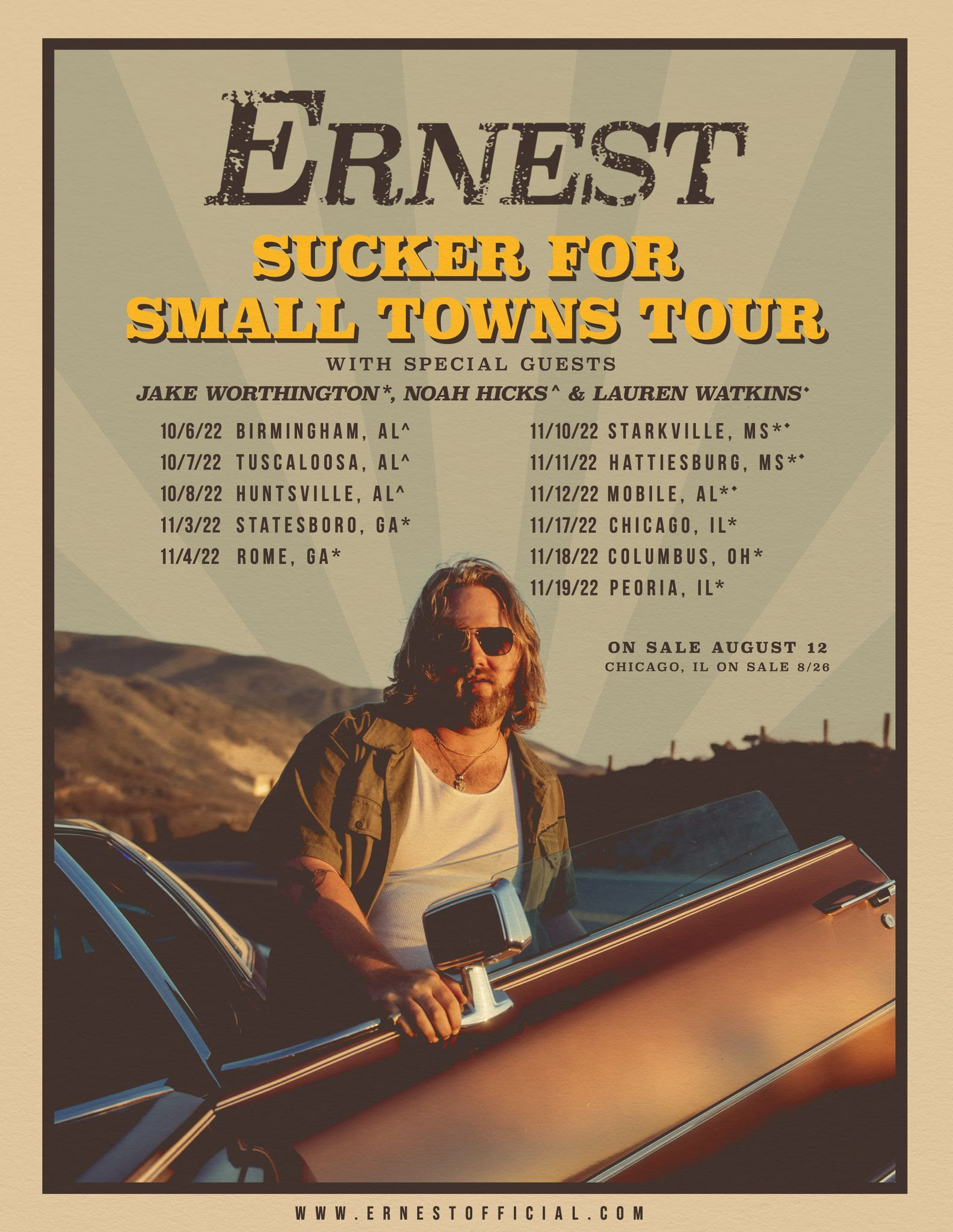 NASHVILLE, TENN. – Nashville’s “busiest – and most consistently successful – creative force” (Tennessean) ERNEST announces today his first-ever headlining Sucker For Small Towns Tour. Kicking off in Birmingham, Ala. on October 6 and continuing through mid-November, the singer/songwriter brings Flower Shops (The Album) – one of 2022’s best Nashville albums (so far) – and more selects from his catalog to the road. Country up and comers Jake Worthington, Lauren Watkins, and Noah Hicks join as support across the fall run.

Concertgoers can join ERNEST’s community to receive a code for tomorrow’s (8/9) pre-sale by texting (615) 235-5823. Subscribers will receive the code in the morning before the pre-sale goes live at 10am local time. General on-sale goes wide Friday, August 12 at 8am CT for all dates excluding Chicago, which will be on-sale August 26. Exclusive pre-show VIP Experience Packages are available for all shows at point of purchase, including: one general admission ticket, VIP early entry into the venue, a Q&A and photo with ERNEST, a pre-show performance, signed merchandise, and more.

I’m stoked to get out there and take the ERN show on the road,” ERNEST shares. “Gonna be playin to rooms I think we can pack! It’s an experience we put together specifically for the fans and I think it’s going to be special for them to be able to say they were there for it!”

ERNEST “embraces the genre’s deep roots and seeks to modernize them for today’s younger generation” (HITS) both as a writer and an artist. He just clinched his sixth #1 as a songwriter with Morgan Wallen’s multi-week chart topper “Wasted On You,” while his own debut single “Flower Shops” was named Taste of Country’s #1 country song of 2022 so far. The hitmaker is on the road now opening select dates of Wallen’s sold out Dangerous Tour and playing stand-alone sets at fairs and festivals nationwide.

Nashville’s most unpredictable hit maker ERNEST is “The Charmer” (MusicRow), a triple threat talent and one of Music City’s on the rise artist/writers that’s changing the status quo. As a chart-topping songwriter, he fuses influences ranging from Eminem to George Jones, creating a twist-heavy verse style that’s become his signature, proving its mettle, and earning him six #1 hits to date. The eccentric free spirit and 2022 CMA Triple Play Award winner launched his debut single to country radio “Flower Shops” feat. Morgan Wallen in January to 88 first week stations, the #1 most added single of the week, and is Top 20 and rising now. His debut full-length album of the same name – Flower Shops (The Album) – is out now, showing off the more classically country side of his craft. ERNEST appeared alongside 90s country legend David Lee Murphy and labelmate Ben Burgess on HIXTAPE: Vol. 2track “Red Dirt Clouds” last fall, and his podcast Just Being ERNEST is in its third season, hosting guests like Keith Urban, Diplo, Jason Aldean, Bobby Bones, and Craig Wiseman, with many more to come.

A La Porte, Texas native, Jake Worthington is a traditionally influenced country artist whose honky-tonk stylings first impressed fans as a finalist on NBC’s The Voice (2014). Following his time on the show, the singer-songwriter released a pair of EPs (2015’s Jake Worthington and 2017’s Hell of a Highway), which featured tracks like “How Do You Honky Tonk,” “Don’t Think Twice,” and “A Lot of Room to Talk,” tallying over eight million on-demand streams. The red dirt country star has opened for Cody Johnson, Riley Green, Pat Green, Hank Williams Jr., and more. Now signed to Big Loud Records, Worthington dropped HIXTAPE: Vol. 2 collaboration “Jonesin’” with Ronnie Dunn and Jake Owen as he gears up for his own full-length debut.

Nashville native Lauren Watkins has been living and breathing country music for as long as she can remember. The free-spirited singer/songwriter is no stranger to the stage, spending her teenage years performing at hometown honky tonks and holes-in-the-wall. The 22-year-old spent her just-wrapped college years at Ole Miss, earning a marketing degree and falling in love with songwriting, honing a pen as sharp as her wit. Drawing inspiration from indie country icons like Willie Nelson and Sheryl Crow to genre mainstays Eric Church, Miranda Lambert, and Chris Stapleton, Watkins brings a tangible relatability and boldness to lyrics all her own. It’s that uniqueness that led her to sign a publishing deal with Songs & Daughters and Big Loud Publishing, joining a roster as one-of-a-kind as she is. Charging forward into her next chapter, Lauren shares: “My goal is to reach people by being completely myself. Whether it’s how I present myself on stage, through the words I’m singing, or having the chance to meet people individually, I want everyone to feel like we really know each other.”

Recently named Billboard‘s “Country Rookie of The Month,” Nashville-based rising country artist Noah Hicks brings a vocal warmth using creative lyricism and ingenuity, producing a distinct sound that emanates the feel of his Georgia upbringing. A sound that is evident on his forthcoming six-track EP — Tripping Over My Boots — out Friday, September 30 via RED Creative Records. Raised in a musically inclined family, Noah was naturally drawn to the art form. He officially moved to Nashville, TN from his hometown in 2020 with a guitar, some songs and a distinguished voice, which caught the ears of RED Creative Group. Noah has been steadily building fans and accolades including American Songwriter and Holler with every release. That go-getter mentality Noah possesses has led him to where he stands now: a promising up-and-comer with a series of market-friendly songs on Tripping Over My Boots. Furthermore, Noah takes his musical prowess and packages it in an unparalleled, high-energy live show that seals the deal for potential fans every time he takes the stage. 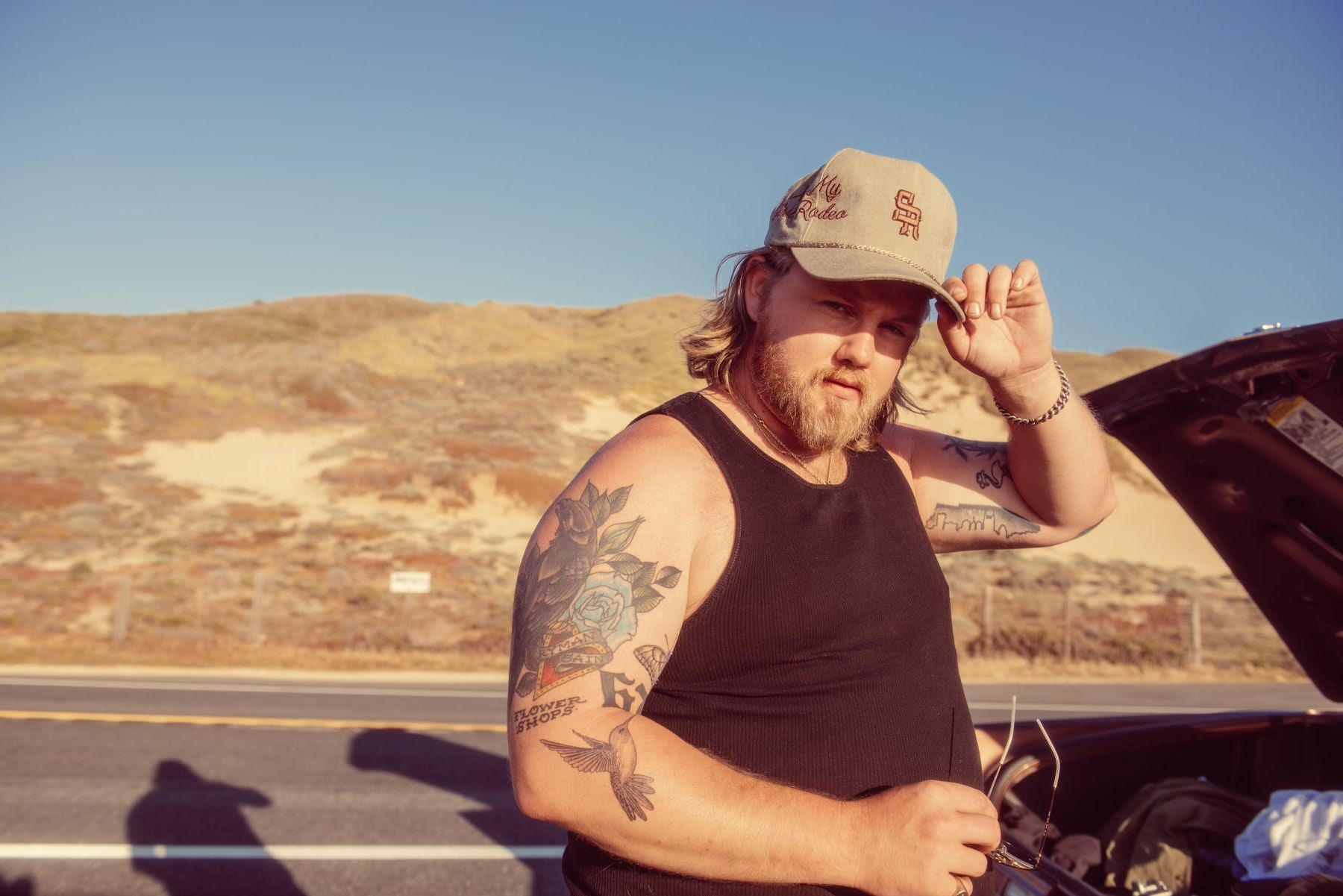 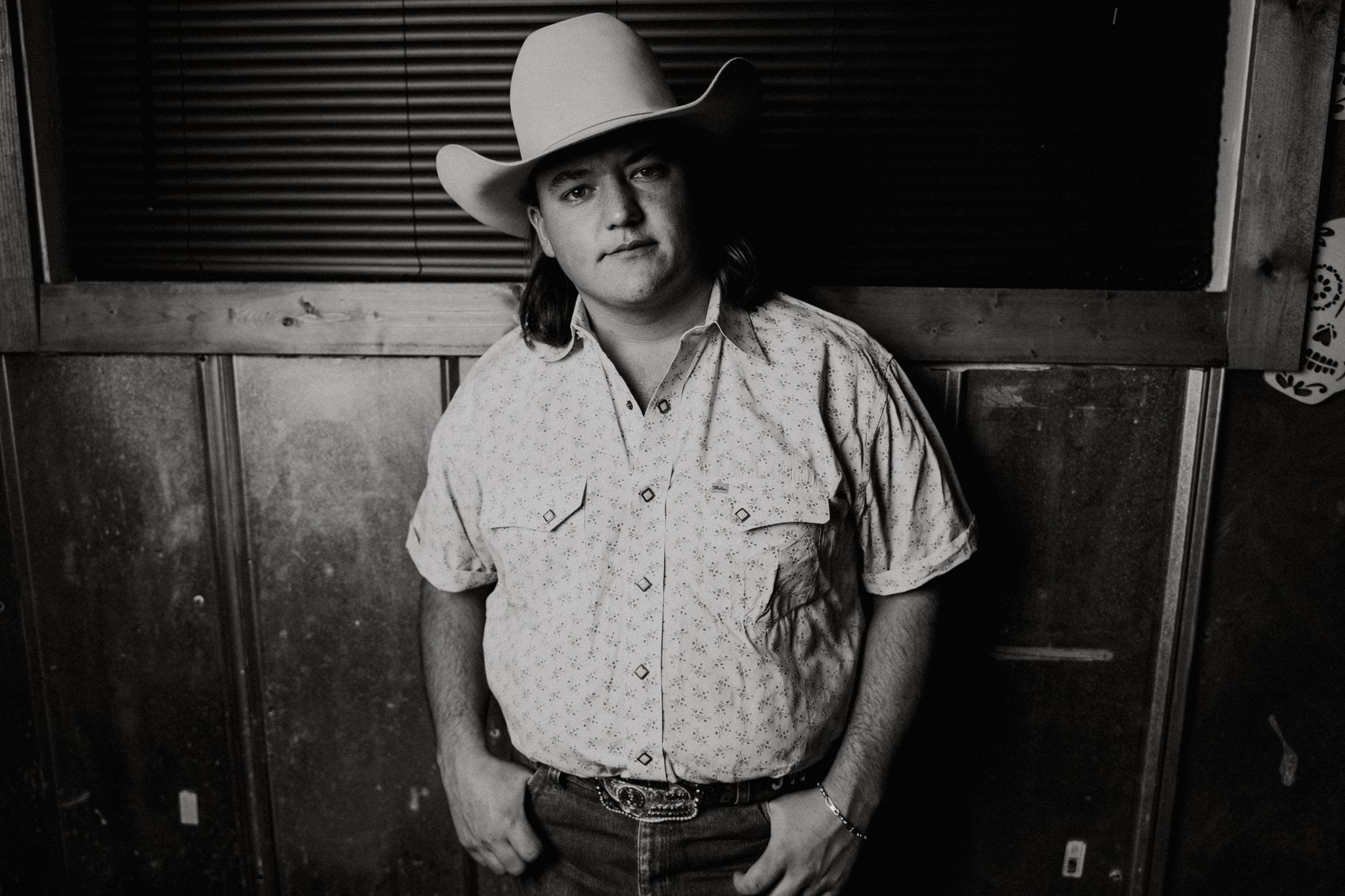 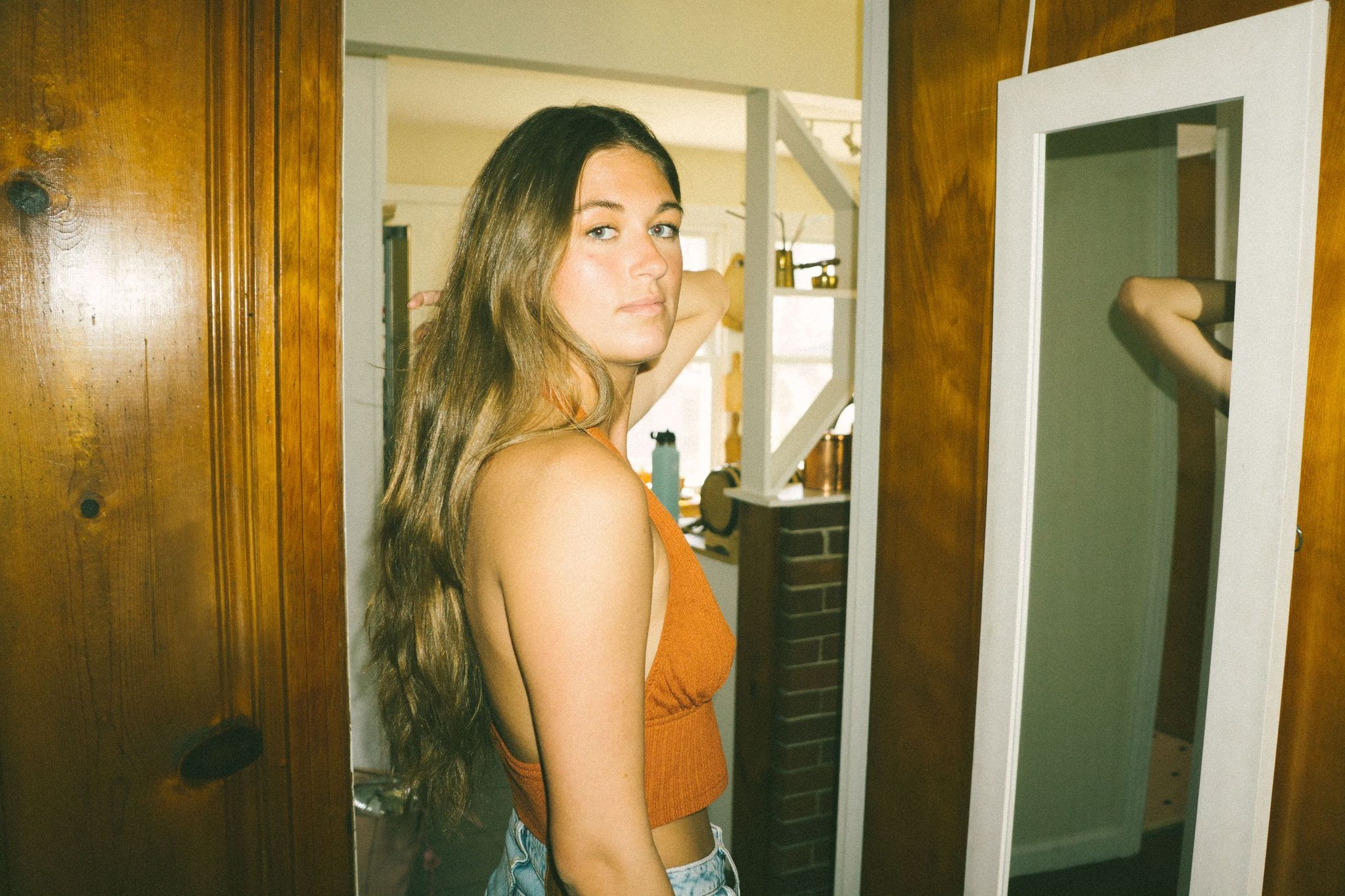 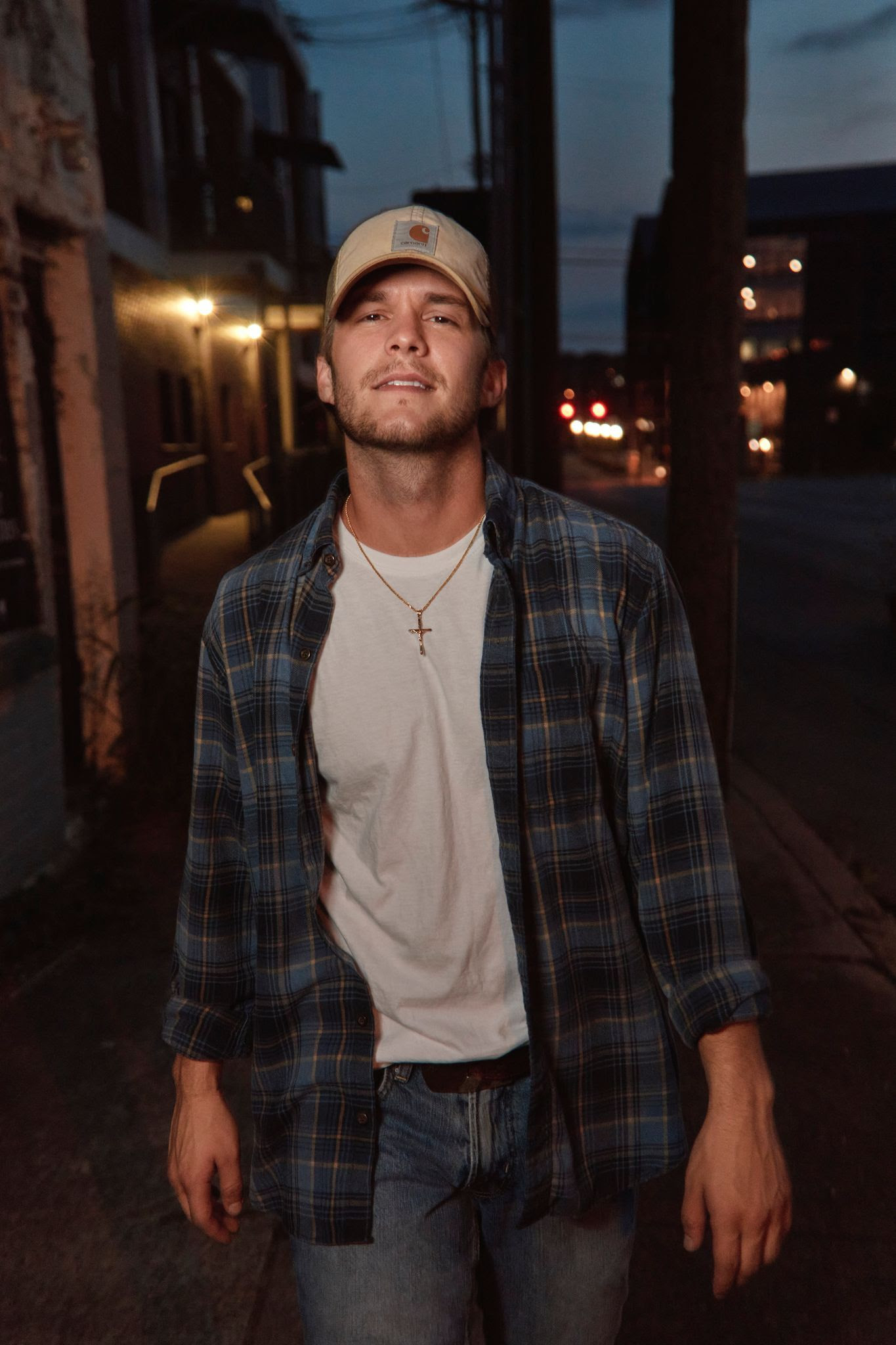